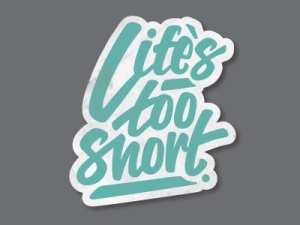 Let me establish something upfront: anyone who uses the term “lifes to short” is dead to me.

If I need to explain why, you’re dead to me too. Simple as that.

You may be thinking, “lighten up Matt, life’s too short to get hung up on unimportant crap like correct grammar and the factual accuracy of clichéd statements”. Unimportant crap!? How very dare you! But let’s not go there – it’s this “life’s too short” palaver I’m more interested in exploring.

Life’s too short. Hmmmm… but is it? Is it really? Coz I think not. I’d argue that, in fact, as a general rule life is actually pretty long. In this post I’m taking on the persona of someone I’ve frequently been compared with in order to bust this myth once and for all.

Now it’s true that in some very specific and usually tragic circumstances, life does indeed seem too short. A stillborn or SIDS baby’s life is too short. A young person taken by terminal illness or in a pointless accident – their lives were too short. Even my dear old Dad, who parted company with life at the age of just 69 – his life was arguably too short as well.

But, all other things being equal, most of us weren’t stillborn. Most of us don’t concede defeat in our teens or twenties to either illness or a nasty twist of fate. And a very great number of us won’t have the grim reaper tapping us on the shoulder before we hit 70.

As I stare down the barrel of 40, I have vivid (if fleeting) recollections of things that happened in 1976, when I was just two-and-a-half years old. I can think back to events of thirty years ago when I was all of eight and it seems like an absolute eternity, an entire lifetime ago.

If all goes well – that’s to say, if several decades of poor diet, drinking, smoking, extended interludes of physical inactivity, weight gain and a certain penchant for genetically acquired old man-style diseases don’t eventually catch up with me in any of several thoroughly undesirable ways – I fully expect to be able to reflect on those same memories thirty years from now. By the time I’m 68, I wonder how many lifetimes ago my eighth birthday in the McDonald’s party room at Carlingford Court will seem then?

I love that the w-w-web is full to the brim of pages authored by people who like nothing more than to publish lists of stuff. Makes researching this topic so much easier – or does it? I went trawling the interweb for the most common triggers for the old “life’s too short” chestnut. One list I found, specifically dedicated to the “life’s too short to…” theme, cites things like eating bad calories, drinking bad coffee, not laughing, not having joy in your life, not travelling and not having a pet. Another list says life’s too short to judge yourself by others’ opinions of you, to multi-task and to be a yes-man/woman (i.e. someone who always says yes to everything without processing what’s being requested first). Still other lists suggest life’s too short to stay in a controlling relationship, to run ourselves down without adequate rest periods, to not fill our lives with happy memories to look back on, to not take that dream holiday we always wanted to go on, to give up something we’ve always enjoyed because someone else makes us, to spend too much time in front of the television while it’s still light outside and to not find one thing to smile about every day. But I think my favourite list includes numerous things that life is too short to tolerate, including vagaries such as people who bring you down, unnecessary miscommunication, your own negativity, an unhealthy body, pressure to fit in with the crowd and this particular gem which I think is my favourite thing not to tolerate of all: people or beauty ads that make you feel inadequate.

It wouldn’t be practical to call out every single thing I found. Suffice it to say that the list is, quite literally, endless. While there were a few recurring topics – travel well, find love, variations on the smile/be happy/have joy theme, & cetera – most seemed specific to the individual author’s life-stage or experiences. Note to self: need to re-jig the online research strategy for this one.

Now, for the time being let’s set to one side the fact that some of these arguments are entirely lacking in any logic whatsoever. Case in point: “life’s too short to not have a pet”. Kinda bordering on a double-negative there. If we flip it around a little, the statement is actually that “life’s not too short to have a pet”. Ummmmm… yeah, I guess that’s true. How that one even made it onto the “life’s too short” list in the first place,  I’ll never know. As for the others, most of the examples I’ve mentioned would be nye on impossible to quantify in terms of the amount of time they’d suck out of your life – which, you’ll recall, is already too short – or to ascertain how anyone came to conclude, or even calculate, that life was indeed too short for the said activities.

So I tried to work it out. I took some common life elements along with some of the examples above and did some rudimentary calculations. I based the calculations around the average time you’d reasonably expect these activities to take up, against a backdrop of the overall life expectancy of an Australian – currently 81.2 years, according to the United Nations. My calculations revealed some very interesting results and it’s now clear that the average Australian has sufficient longevity to:

I don’t know what you’re thinking right now, but I’ve not seen any compelling evidence to suggest that life is, indeed, too short. In fact, it seems to be quite the contrary and if we look at it from a different angle it’s practically irrefutable. 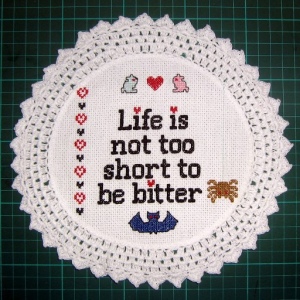 81.2 years is a very, very long time – for anything. We have all the time we want to spend on whatever we choose to spend it on. If you want to spend every moment of it full to overflowing with activity and excitement, go for gold. If you want to waste time watching tele while the sun’s still out, or relaxing, or being hungover, or doing absolutely nothing – do it! Whether we know when we’ll be hit by that bus or not, it doesn’t change the fact that 81.2 years isn’t a short period of time. Human beings have a natural tendency to bitch and moan about things they don’t enjoy doing, often comparing these activities with wasting time. But you know what? To some extent, that’s just life. We all have to do things we don’t especially enjoy from time to time. If it’s so bad, you have two choices: keep doing it, or stop doing it. It’s up to you. You can only go one of two ways. Just don’t go making factually inaccurate references to the length of your life in order to justify your decision or how you feel.

Conclusion: life is, in fact, not too short.