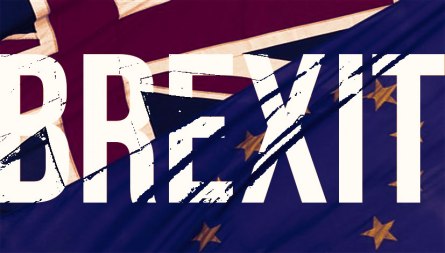 With Scexit still an event from the recent past (and, perhaps, now also one in the near future), it seems the great and the good of 21st century made-up language thought it was time for another silly new combo-word.

But this post is far more than just another story about the earth-shattering, Union-changing events of last week. This is far more important than counting the number of self-serving politicians who convinced more than half the population of Britain—mostly, it must be said, the half who have the least number of years left to survive the outcome—to believe their lies and their scare-mongering. This is more important than all of that—this is all about language.

Specifically, this is about the word ‘portmanteau’. Assuming you’ve even heard it before, there’s a good chance you don’t know what it means. So here’s a brief tutorial:

It’s all a tad complex but, in a nutshell, a portmanteau is a new word formed from elements of two otherwise unrelated words. Typically, new portmanteaus begin life as tongue-in-cheek colloquialisms. Some of them fall into common-enough use to be formally sanctioned as new words.

It’s thanks to Lewis Carol’s 1871 sequel to Alice’s Adventures In Wonderland that we have the current (and second) Anglicized meaning of the French word ‘portmanteau’.

In Through The Looking-Glass, Humpty Dumpty explains to Alice that words like slithy and mimsy, which she’d seen in a poem, are “like a portmanteau—there are two meanings packed up into one word”.

If you’re wondering “WTF does that even mean?” right now, that’s because Mr. Dumpty’s explanation only makes sense in the context of the day, when the first Anglicized use of portmanteau was to describe a suitcase that opened into two halves.

Despite being armed with all those fascinating facts, it’s still odds-on that you couldn’t even begin to guesstimate the ginormous number of portmanteaus you almost certainly hear and use every day without knowing.

For example, some of today’s most commonly used portmanteaus include because, smog, goodbye, fortnight and brunch. And there are countless others.

While some clearly look like two blended words—e.g., dumbfound, outpatient, paratroop or simulcast—there are plenty of others that aren’t so obvious—smash, squiggle, cellophane, hassle.

Chortle, from the same Lewis Carol novel as slithy and mimsy, is the lovechild of chuckle and snort. And the nation of Tanzania was born when Tanganyika and Zanzibar merged in the 1960s.

The UK’s Oxford and Cambridge universities have long been collectively referenced as Oxbridge; spoon-like forks (or fork-like spoons) called sporks have been around for a hundred years or more ; and blended dog breeds are almost always known by chortle-inducing portmanteaus, including gems like labradoodle, cockapoo and puggle.

Portmanteaus have always been popular in entertainment, too—they’ve given us sitcoms and Britcoms, mockumentaries and rockumentaries, romcoms, dramedies and biopics (the latter of which, oft-mispronounced, is actually pronounced as bio + pic, not bi + opic – WTF is an “opic” anyway and why would anyone ever think that was the right way to say it?!).

The term Califiornication was first used thirty years before the Red Hot Chili Peppers decided it was a good name for their 1999 album; and SciFi geeks the world over are well-acquainted with cosplay and fanzines.

The 1960s was the decade of The Beatles; in the 70s, Jim Henson made his mark with The Muppets; throughout the 1980s we signed on to Medicare and used Telecom to communicate, sometimes via telex or intercom, while Telethons were an effective combination of TV and charity fundraising. And by the mid-90s, half the world was obsessed with Britpop.

Disabled athletes take part in the Paralympics; whilst there, they likely hear some Spanglish, Chinglish and Franglais and use their camcorders to capture video footage of the goings-on around them.

Today we eat broccoflowers and cronuts and drink alcopops, mocktails and frappuccinos; and anyone with a penchant for retail therapy is generally known as a shopaholic.

Our Highway Patrol officers ask us to blow into a breathalyzer and, when we’re on holiday, we might take a train from the UK to France through the Chunnel or stay in a motel.

In short, all those words are portmanteaus. 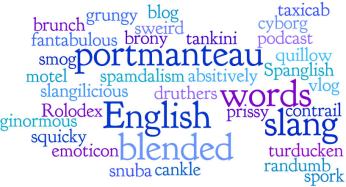 The English language is both comparatively complex and sloppily bastardised. It’s the first, second or foreign tongue of more than a billion people, many of whom either don’t understand how to use it correctly, or couldn’t care less one way or the other. At the same time, we’ve reached a curious juxtaposition in our social and cultural development.

On one hand, people spend endless hours every week inanely swiping through photos of other people’s food, drink and travels and reading statements from ‘friends’, some of whom they barely know, about what they’re doing or where they are.

On the other hand, everyone’s allegedly so hyper-busy, with decreasing attention spans pitted against a compulsion to constantly broadcast where they are, where they’re going or where they’ve been, that they not only eschew the use of complete words, they now avoid using two words (or even two syllables) if there’s a chance to combine them into one—however nonsensical the outcome may be.

Over the past decade or so, society has become obsessed with finding ways to type, read and speak with ever-increasing brevity. Result: portmanteaus are more plentiful and far sillier than ever before.

Instead of creating words that add actual value to the language or bring real benefit to those who use them, nowadays we have a humongous list of portmanteaus that revolve around superficial topics with little meaning or substance, or that were created for ‘one-time use’, or intended primarily for text messaging and social media.

In the age of the 24 hour news cycle, where everything needs to be broken down to an attention-grabbing sensationalized headline, nothing is sacred where tacky portmanteaus are concerned and they’re applied to virtually everything.

Celebrity couples have been reduced to portmanteaus: Bennifer, Brangelina and TomKat; the entertainment industry also generated the now ubiquitous infomercial, advertorial and infotainment. 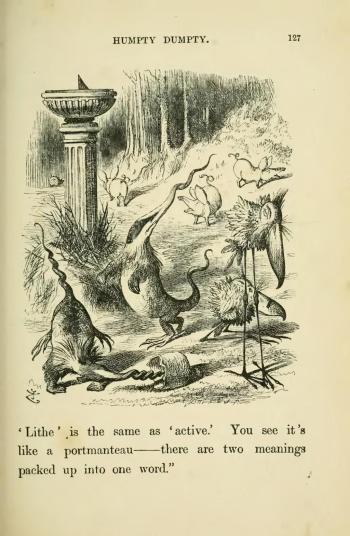 Technology is no doubt the source of many of the 21st century’s most commonly used portmanteaus – email, internet, modem, emoticon, webinar, bit, blog, vlog, cybrarian, freeware, malware, pixel, netiquette and podcast—I wonder if anyone today even remembers that podcast was derived from iPod + broadcast? A screenager is apparently a teenager who is inordinately attached to screen-based activities (a modern portmanteau which surely could be applied to teenagers going back countless decades). A netocracy describes some kind of elite demographic within the online world—and goodness knows there have always been enough of those within virtually every online community. Meanwhile, pharming and phishing have their etymology in a term coined during the 1970s which referred to much the same thing, involving telecom technologies of the day.

Some portmanteaus serve to simplify a concept, like many of the technology-sourced word blends. Others seem to exist solely to remove additional syllables and save a matter of seconds when speaking or writing. Still others are just nonsense words that are born of laziness and serving little purpose.

For example, any kid of an age between childhood and adolescence is a tween—although where exactly the line is drawn between child, tween and teenager has never been clearly defined, meaning that tween can never provide absolute clarity in any context.

Chillax is a favourite way for the cool kids of all ages to describe the act of chilling out or relaxing—it’s not clear in what way ‘chill out’ or ‘relax’ were felt to be lacking as they were but, some time in the not-too-distant past, someone obviously felt our language would benefit from morphing the two words into one word of identical syllabic construct.

And as heterosexual city-dwelling men became narcissistically concerned with their appearance in increasing numbers, so we were blessed with the metrosexual—while it’s meaning is broadly understood, it’s hardly a concept that needed a definition, much less a nonsense tag attached to it.

Brexit is just the latest in a long line of nonsense tags. Despite its limited application, in that it applies only to last week’s UK referendum and related activities, every time it’s used it’s almost invariably accompanied by the broader description of the British exit from the European Union. Like a pointless acronym that always needs to be followed by the words from which it derives just to ensure that it’s understood, so any portmanteau that requires the broader context of the word to be discussed every time the word itself is used effectively serves no purpose.

“But hang on!”, I hear you cry, harking back to the first line of this post. “I never heard anyone refer to the September 2014 Scottish Independence Referendum as Scexit!”. Well, maybe you didn’t. And maybe they didn’t. But why not, I wonder? How come the brains behind Brexit never thought of Scexit first? Maybe they should’ve called it Scinderendum? That’s a portmanteau too, and it would’ve worked just as well (and is certainly just as silly) as Brexit.

The English language is littered with portmanteaus. I have nothing against them—good, strong portmanteaus that serves a purpose and bring some efficiency to the written or spoken word can be a wonderful thing.

But Brexit? You gotta be fkidding!