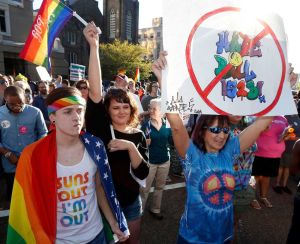 Imagine this: you’re in the southern US states of North Carolina or Mississippi. You’re lesbian, gay, bisexual, transgender or inter-sex. And, for whatever reason, this is known or otherwise apparent to a business person or service provider, who can now legally decline to provide certain services to you solely on the grounds of your sexuality.

You can just imagine how that went down in today’s overtly left-wing world but, for a change, the furore has been entirely warranted.

The bills just passed into law (House Bill 2 in North Carolina and House Bill 1523 in Mississippi) seek to protect the so-called “religious liberty” of those who cannot, in all good conscience, bring themselves to provide certain services to you, due to their “sincerely held religious beliefs”.

The somewhat tit-for-tat argument of some conservatives is, broadly, that forcing the God-fearing folk of the American south to recognize, interact with or otherwise tolerate gay and lesbian people as equals in every respect is just as discriminatory as the rights and protections that the bills seek to prevent LGBTI people from accessing.

Coz here’s what it boils down to: they believe that it’s not OK for me to be myself and to live a good, healthy, happy life, with all the same rights and protections as them. So far, I’m not entirely sure how I’m supposed to have discriminated against them.

Additionally, they believe that it is OK for them to decide not to provide goods and services to me due entirely to an element of my being that I neither chose nor learned, but which also doesn’t hurt anyone and which is absolutely nothing to do with them in any way, but which they choose to disagree with thanks to religious teachings from a book written two thousand years ago. Again, I’m not clear exactly where I discriminate against them in that equation.

I do understand that they don’t subscribe to aspects of my lifestyle or the things I find important. Snap! I don’t especially care for some of the things they believe either, particularly the thing about me somehow being a lesser person who needs to change the way I naturally am to become something they’re more ready to accept.

Coz I think of them as people who are free to live their own lives and believe whatever they wanna believe. I don’t care about their private lives. Whatever they get up to, they just need to make sure that their beliefs don’t lead them to behave in a way which is 100% discriminatory towards me or anyone else. Why can’t they do that? Why can’t they just think of me as a fellow human being? It’s not asking that much, is it?

And they might also want to ensure they have all their ducks in a row when it comes to their own adherence (or not) to the teachings of the ‘good book’. For example, I’m pretty sure it says something about treating others the way they’d like to be treated themselves. Since they’re clearly so steadfastly adhering to that book’s teachings, I’m sure they wouldn’t want to be discriminated against in the way that they’re presently discriminating against us.

I can hear their protests even now. “But the bible tells me this is the right thing to do”. Well, that bible also tells you to put your neighbour’s eye out if he puts out yours (Exodus 21:24) and not to wear clothing woven of two kinds of material (Leviticus 19:19), but I’m pretty sure – or, at least, very hopeful – that you don’t subscribe to either of those instructions.

Just as you clearly don’t seem to observe the words of Matthew 6:1 – “Beware of practicing your righteousness before men to be noticed by them; otherwise you have no reward with your Father who is in heaven”. Whoops! Looks like your God also forbade you from doing precisely what you’re doing. Seems wearing your piousness on your sleeves actually isn’t what your supposed to do at all – which, of course, anyone who so slavishly adheres to the bible’s teachings would already know.

But wait, there’s more! The said Father in heaven also instructed you not to fight being sued, to turn the other cheek, to give to those who ask of you, to not judge and to love your enemy.

You can’t have it both ways.

So here’s an idea: how about you turn your minds away from our bedrooms and our private lives and stop thinking about us in terms of sex acts and, instead, try just thinking of us as people.

You know – the same way I think of you.