This is an homage to a more connected time. Not digitally connected. Not connected to the so-called “information superhighway” or via copper wires, wi-fi networks, IP addresses, social media, instant messengers, posts, statuses, tweets or likes.

I’m talking about a time when we were an infinitely more connected society.

As we limp on through the second decade of the twenty-first century, at a time when warmongering, extremism, violence, serious drug addiction, anti-social behaviour and mental health concerns are ever more prevalent and we look towards a future in the hands of a generation of narcissists, how ironic it is that we have so much more at our fingertips than we ever did only twenty years ago, thanks to being digitally connected, but at a societal level we’ve become massively disconnected.

Comparing “a year in the life” twenty years ago with today paints a pretty grim picture.

Back in 1995, I booked two ad hoc appointments, changed a couple of service providers (not that there were too many to be changing twenty years ago), booked my car in for a couple of services and diligently booked a handful of checkups with my GP throughout the year. Of course, I made all of these arrangements by phone.

Between January and December that year I must’ve made about eight phone calls to service providers, about a range of everyday things that needed attending to. Over that same timeframe, I paid for groceries at the supermarket roughly 208 times and during about twenty-four of those visits I couldn’t find what I wanted and had to ask a staff member for help.

During the course of that year I made about 300 phone calls to friends and family. Some of them were nearly interminable, lasting hours on end for no apparent reason. Some were short and sweet, to confirm details of where to meet and when, or to advise that I couldn’t make it. Some were great catch ups with interstate family or absent friends not seen for some time, or with old friends I only spoke to once or twice a year. One of them was a particularly awkward call to someone who was about to become my ex, with me explaining why we could no longer be quite as close as we had been anymore – you know, the whole “it’s not me, it’s you” thing.

Twenty years ago, I used to head to the post office at least once a month to pay one or more of my steadily increasing number of bills over the counter with our always friendly local Australia Post staff. About once a fortnight I’d head to the local bookstores to find another tome with which to feed my imagination. And at least weekly I’d trawl through my local music stores (some of them were still called “record bars” at the time) to buy as much new music as my minimal – and already stretched – income would accommodate.

Back in ’95 there were a handful of things I used to do on a more-or-less weekly basis: I’d go into the bank and ask a bank teller to update my passbook with my most recent transactions and maybe do a bit of other random over-the-counter banking from time-to-time; I’d head to the post office to post a letter, pay for stamps or send a parcel of some description; and I’d go to the petrol station, where the attendant would always greet me with a chirpy “‘ullo luv, air’garn?”.

On 240 weekdays during 1995 I crossed the Harbour Bridge on my way to work. Because my fear and loathing of coins was of almost OCD proportions, I always had to pay with a $5 note and the generally unpleasant tollbooth attendant would have to give me change (which, ironically but quite unavoidably, was mostly coinage, so you can imagine my horror on a virtually daily basis).

On close enough to 360 days of the year that was 1995, I bought a newspaper from either a newsagent or the paper stand at the railway station.

And on virtually every day of the year, whenever I went anywhere on foot, I’d catch the eye of someone passing by and flash them a quick smile, ask them how they were going, stop and have a quick chat about how cute their dog or baby was, comment on the sudden change in the weather, or just offer a simple “hello”. Three times a day or more, at least. 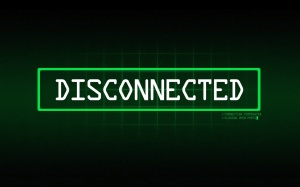 Phone calls to friends are, at least for me, a thing of the past. I can’t stand talking on the phone, to anyone, for any reason. At a stretch, I can have the conversation by Skype, to at least lend a vague sense of face-to-face contact. Otherwise, it’s social media, instant messengers and text messages all the way.

Today, my bills are all paid online or by automatic direct debit. Every novel I read is bought online and downloaded to a reader and every new album I listen to is also bought online and downloaded to a cellular device or mobile music player. I doubt banks even offer passbook accounts any more and, despite what they might say, these days the big banks impose fees on virtually every over-the-counter transaction to make sure no right-minded customer ever wants to go into a branch.

Almost anything I need to do in a Post Office today involves me, my items and a self-service checkout and when I need to refuel my car, I can simply “tap and go” at the pump, without ever setting foot inside. My bridge toll’s paid automatically by an eTag and I read every item of news I ever need to know about online.

And in 2015 whenever I go anywhere on foot, I’m at constant risk of being mowed down by countless fellow pedestrians with their faces buried in their phones, or I’m dodging others in a gigantic noise-cancelling headphone-induced trance, or I’m stepping out of the way of people in too much of a hurry to step out of mine, or I’m just looking, somewhat hopefully, to someone, anyone, to return my glance, throw me a smile, say hi, ask how I’m going, comment on the weather, or a cute dog or a baby or something… anything. But it never happens any more.

In 2015, we’ve become a society so involved in ourselves and so rooted in the here-and-now, as represented by the device in our hands, that we don’t even look at one another. No – it’s more than that. We don’t even take the time to acknowledge the presence of others. We’re so paranoid about virtually everything that we’re reluctant to look sideways at anyone, let alone speak to them. We’re surrounded every day by people whose cultures – unbeknown to us – teach them that looking away and avoiding eye contact is a sign of respect. We just think they’re being ignorant or rude; they probably think the same of us.

And what has all of that online purchasing and automated transacting and eTags and cellular devices and cultural differences resulted in? More than 2½ thousand lost interactions with other human beings every single year. That’s 2,500 face-to-face or voice-to-voice interactions with one or more other people that we used to have every year, but no longer do.  2,500 human touch points a year – gone.

Even as a ranty old man who’s found people hugely annoying in just about every possible way for as long as I can remember, that’s pretty disturbing.

I shudder to think what it means for future generations.

*Disclaimer: the “I” referenced in this article is a hybrid of myself and “the average person” . This article is not intended to be a 100% accurate re-telling of my own existence, neither in 1995 nor today.