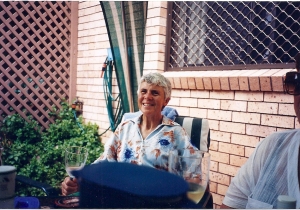 20-odd years ago my Dad’s sister, Aunty Mary, gave me a little book with a black cover. It had the word “Inspirations” emblazoned across the front in gold letters and was held together by gold spiral binding. I don’t remember exactly when or why, just that she gave it to me and said “I hope you can take something from some of the words in this book, Matt, some day when you most need to”. Most of the spirals are gone now, but the very first page I laid eyes on that day is still the page that sums up everything I’ve always felt about my Aunty Mary: it says, “You can preach a better sermon with your life than with your lips”.

My Aunty Mary died yesterday. She was my favourite aunt. In saying that, of course, I mean no offence to my other aunt. I’ve only ever had two aunts, but you know how it is – everyone has a favourite! Some people have more options to choose from, but even when you don’t, you still end up with favourites and Aunty Mary (or “AM”, as I started calling her in my early teens) has been my favourite aunt for as long as I can remember and probably longer.

Last night, from his home on the other side of the world, my brother posted a typically eloquent ‘eulogy’ to AM on Facebook. I skipped the banal but well-meaning “RIP” and “Sorry for your loss” comments and went straight to the ones with a little more thought behind them. Then I added my own. In it, I attempted to draw an analogy. I told my brother that as he and I got older, thinking about our family was a bit like looking up at a dark night sky sparsely populated by only a handful of stars and watching them all going out like fairy lights being turned off one by one. “So many of the most important ones from our childhood have gone out over the past 8 years. It’s an odd, sad feeling…”

Sometimes, I can’t help but feel I’m walking the line where family’s concerned.

It really is quite an odd, sad feeling. AM was the last blood link to our dad, which is sad in itself. But, as my brother pointed out yesterday, aside from he and I our aunt’s death also effectively puts the kibosh on dad’s entire family line. In fact, realistically, even including he and I it’s still the end of the family line, given that there’s virtually zero chance of either of us ever producing offspring.

I haven’t asked my brother how he feels about that yet. He and I are quite different in that respect, so when I do ask I suspect he’ll deliver a measured, nonplussed response. He’s a carbon copy of dad: straight up and down, factual and (mostly) very sensible. I, on the other hand, take after the maternal line: hot-headed, temperamental, verbose, over-analytical and histrionic, that’s the mold I was apparently cut from. Who would’ve thunk it!?

So while our aunt’s death no doubt leaves both of us feeling a whole bunch of different things, I’m probably the most inclined to ponder the end of the family line, in ways that likely wouldn’t even cross my brother’s mind (no judgement there, just an observation). For example, first and foremost I’m sad but there’s also a sense of pressure, of somehow being responsible, to a degree, for the end of the family line. It’s as if, even though I had no control over my own nature, I somehow secured, if not brought about, the downfall; as if I somehow placed a pox on both paternal houses. Thank someone else’s Gods that we can’t be held accountable for the demise of the two maternal houses as well! 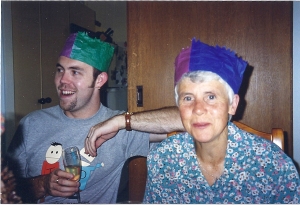 My paternal grandparents were, collectively, two of 22 children, born at a time when the mortality rate generally – and especially for infants – was high, so lots of them never made it beyond the early 1900s. Even so by the mid-1950s my Dad (who the family called “Joe” due to his uncanny resemblance to a long-dead uncle), Aunty Mary and our Uncle Bill still had more aunts and uncles than you could poke a stick at. Most of them became nuns, priests or missionaries so, arguably, the end of the family line was very much on the horizon long before I was even born.

By the time my brother and I arrived on the scene, our nuclear family numbered just four, while most kids I knew seemed to have at least two or three siblings; worse still, our extended family only stretched to ten: a maternal great-grandmother, grandmother and uncle (plus an aunt-by-marriage) and a paternal uncle and aunt. That’s it. My brother and I never knew three of our grandparents; neither did we have any cousins. My maternal uncle and aunt never had kids, while both of dad’s siblings gave themselves to the church from a young age.

We also used to move around the country a lot with dad’s job. For most of the first 13½ years of my life, more often than not we were living whole states away from our extended family. Aside from anything else, that certainly made for a few very quiet Christmases. Even so, relatively quiet Christmases for four – plus or minus a visiting grandmother, visiting uncle / aunt, or overseas son – became the norm for us.

In fact we were often reminded over the years that some people were actually envious of our simple little Christmases. Everyone else seemed to spend all day involuntarily traversing the country, moving between multiple locations to ensure all requisite in-law visits could be ticked off, all the while adhering to an itinerary of such military precision that everyone was rocking back and forth in the corner by the end of the night. We never had a single Christmas Day like that, nor do I recall us ever having the apparently traditional Christmas Day family fight. Our Christmases were good times and happy days with as many as possible of our tiny extended family (and other extended-but-not-technically-related family) coming together to celebrate Christmas. Or just to show how much we meant to each other. And maybe a bit of God stuff in there too, for the more spiritual of our number. As lovely as the whole Christmas thing still is, I don’t think I’ll ever stop missing the way it was.

Things started to change for AM a little over a decade ago, when she was diagnosed with a form of late-onset epilepsy. She started having strange turns. Then she had to stop driving because her eyesight was failing, despite tests finding nothing wrong with her eyes at all. She started to lose her “spatial awareness” and began wandering, forgetting where she was going and consequently getting lost. The last time I saw anything even vaguely resembling the woman I’d so hugely admired for so many years was a few months after my father’s death, nearly six years ago now. After that, there was a rapid decline. An undiagnosed but Alzheimher’s-like disease stripped away the mind, soul and spirit of my Aunty Mary so quickly and so completely that it was difficult to believe what we were seeing. Our once wonderfully fit and active AM had been totally bed-ridden for the past four years. With her eyes open but unable to see, she was also unable to move herself, unable to feed or bath herself and largely unable to speak, aside from a few nonsense sentences and largely indiscernable words every now and again. Even as a heathen, I can only hope that she’s gone to a better place and that next Christmas will be just as good as the ones she shared with us for so many years.

But here’s the rub: I am a heathen! I’m not religious. I don’t go to church and I don’t believe in the afterlife, so I can’t claim to hope that AM’s “in a better place”, because I don’t believe in that stuff to begin with! I’m not even overly into Christmas, neither as a religious event nor a commercial concept. I don’t do crowds or enjoy gatherings of people. I’m not especially sociable, but at the same time I’m not lonely and nor do I consider myself ‘alone’. I’m not into relationships and I don’t ever want offspring. And yet, every time another star disappears from that vast empty sky of extended family, I get these pangs of angst and the fear of a lonely future. What, exactly, am I so worried about, though? How different can the future actually be anyway, when you come from a baseline of hardly anyone in the first place? Particularly as a happily singular, ranty old man, these concerns don’t make sense to me.

I won’t go in for a spot of armchair psychology, though, other than to say that this is just mourning and it will eventually pass. I don’t think my emotional responses mean anything, other than to suggest that I’m perfectly normal. Well, sort of. Maybe not so much of the “perfectly”. Or the “normal”. I’m a relatively typical personal, who loves his family, who naturally mourns losses and who doesn’t necessarily want to end up old and alone and I don’t think there’s anything especially odd about feeling that way. 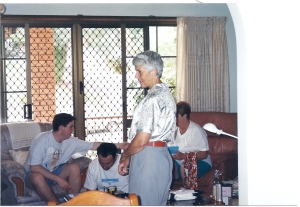 I also know this initial flush of angst will pass. But for me the death of my Aunty Mary will always represent the loss of one of the most intelligent, eloquent, inspirational women I’ve ever had the very good fortune of knowing. Better still – I didn’t just ‘know’ her, there was a blood tie between us. Expertly and single-handedly, she complemented my parents’ guidance and teaching with her own unique and indisputable brand of wisdom; she educated me – with her life more so than with her lips – to what being a truly good person really means; she was the embodiment of the kind of public spirit and social conscience that always had humility, kindness and a liberal even-handedness at their core, everywhere she went and in everything she did.

She wasn’t a nun. She wasn’t even my dad’s sister. She was my AM.

Say hi to Joe and Bill from us, eh!