Everywhere you look these days there’s an online uproar about this or a social media backlash about that. Let’s face it: the media’s come to love a good online backlash the way footy fans love a bit of on-field biffo. That much is patently clear.

What’s also becoming increasingly clear is that so-called online backlashes are little more than media beat-ups based around the opinions of a vocal few. True, they probably reflect the feelings of the silent majority in many cases, but what’s also true is that they’re probably just what most people have always thought – we just didn’t know it before.

Today we have more outlets for commenting, complaining and opining than we’ve ever had; we also have greater access to a media always desperately scrounging about for headlines and so-called ‘news’. But is it really a ‘backlash’ if some lazy hack quotes one person whose perspective doesn’t significantly deviate from how most people probably already feel? For that matter, is it even newsworthy?

And that’s where my favourite TV game show Family Feud comes into it. A few months ago there was one of these so-called ‘backlashes’ to a question asked on Network Ten’s top-rating (and only) game show: what’s something annoying a cyclist might do? 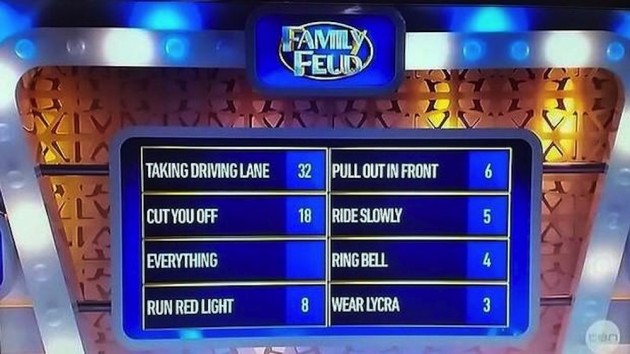 Ask anyone who’s ever used any road in any of Australia’s crowded inner-city precincts, whether as driver or pedestrian, and they’ll inevitably rattle off a list of quite annoying things that cyclists do. However much cyclists try to hide behind their minority group victim syndrome, that’s one inescapable truth.

Arguably, it’s another equally inescapable truth that drivers and pedestrians probably do just as many annoying things as cyclists – perhaps more. Would they be all agog and aghast if Family Feud asked its contestants to name something annoying that drivers or pedestrians do? I doubt it. They’d probably be the first ones to agree.

Victimisation is a very personal thing and not something to be mocked. It just always seems that minority groups with a sense of victimisation that at least appears to be somewhat disproportionate to reality always seem to shout the loudest.

So it was with one of the comments in response to Family Feud‘s ‘outrage’, which managed to get published as far afield as The Washington Post. It was from the head of a cyclist’s group, who said: “Seriously, the hatred against cyclists has to stop… We all know that as soon as you bring cyclists into the conversation you’re going to get ratings, which is really sad”.

Sadder still is that it’s probably only cyclist groups who’d believe that.

For the record, there was a fairly normal variance between Family Feud‘s highest and lowest viewing figures that week, with a ratings dip after the so-called ‘reaction’ to this issue. Myth well and truly busted, thank you very much Mr. Head of Cyclist Group.

The cyclist group fellow also went on to tell Family Feud’s producers that “The next time a cyclist gets killed on the road you’ll have to live with the knowledge that your [sic] partly responsible for the death of a fellow human”.

Wow. Anyone for a spot of histrionics? The potential irony, of course, being the magnificent own-goal it would’ve been for Mr. Cyclist group if ratings actually had increased.

Thing is, Family Feud questions don’t just come from nowhere. They’re little more than broadly understood in-jokes and clichés. Every cliché is rooted in some element of fact for it to become a cliché in the first place. These questions need to appeal to as broad an audience as possible, so they have to be about the familiar – in effect, the in-jokes, clichés and other minutiae of everyday life. There’s always a precedent and Family Feud‘s 100 survey respondents clearly felt there were eight categories of precedent here.

So was this really a backlash? Or was it actually just a bunch of things someone said about something? In other words, was this merely someone’s opinion? That level of melodrama underscores most of the so-called ‘fierce criticisms’ that are so often leveled against virtually everything these days. But it’s actually nothing new.

It’s not like anybody’s thinking differently to how they would’ve thought in the pre-social media age. It’s not even hugely different to how previous generations felt about similar things in the olden days. This rubbish is what people have always thought, the only real difference being that we now have the very great privilege of knowing it, rather than assuming it.

It used to be that people would send strongly worded letters (in the style of “Dear Sir, I wish to complain in the strongest possible terms…”) or phone the TV station to complain about stuff they didn’t like. If there was a sizable kerfuffle about something, it might’ve rated a tiny five-line report on the inside back page of the Sunday papers.

These days the average complainant’s channel of choice is social media and ‘backlashes’, like the one about Family Feud, are even thought newsworthy enough to make the print media, not just the online entertainment pages.

Today’s volume of complaints is doubtless greater than in the old days, but the definition of what’s considered a complaint is now much broader too. Often the number of complaints posted, liked and re-tweeted via social media becomes more newsworthy than what actually led to the ‘uproar’ in the first place. It’s quick, easy and essentially anonymous, so it’s hardly surprising that volumes are so much higher.

In theory people now have more time to consider what they want to say and how they want to say it. The quality of much of what’s posted to social media suggests no amount of thinking time would ever be enough for many people. For most, their immediate reaction – as opposed to a considered response some time after the event – is simply a stream of consciousness; in many cases, it’s just poorly constructed drivel.

In theory, avoiding face-to-face (or voice-to-voice) confrontation should allow complainants to control the emotional responses that would’ve been largely out of their control had they picked up the phone in the heat of the moment. But it’s near impossible to judge anyone’s emotional tone from a five-line comment in response to , particularly when it’s littered with spelling or typing mistakes and devoid of all punctuation and grammar.

Many immediate online responses sound breathtakingly aggressive – but who knows if their authors were smiling and without a care in the world when they put fingers to touchscreen keyboard? Many people never even bother to state their own positions, happier to find a voice vicariously through the liked and re-tweeted words of others.

Which comes back to the original point: most of what’s pounced on by the media as an online ‘uproar’ or ‘backlash’ is nothing more than a collection of thoughts and opinions. Certainly they’re captured and disseminated differently to how they were in the past, but that’s not to say that nobody’s ever had the same kinds of thoughts and responses to similar situations before.

It’s all just the modern-day electronic equivalent of conversations, sharing opinions and the age-old practice of ‘Chinese whispers’. This stuff’s been happening for aeons. It’s just people saying and thinking stuff. 9 times out of 10, it’s not an uproar or a backlash and it’s certainly not news.