I was walking to work this morning and spotted her from a mile off. You can always tell, coz you can only see one arm moving as they walk and it’s usually swaying about far more ferociously than would normally be the case. I guess it’s a balance thing.

I’d say she was a good 50 metres ahead of me. One moment she was more to my right, then more to my left, then back to dead centre. I knew the inevitable result of doggedly maintaining my present trajectory could only be collision, though it was impossible to know how to alter my course to best effect, so extreme and random were her movements. One minute she was striding along at pace, the next she seemed to struggle with the concept of one foot before the other and would slow almost to a complete halt while attempting to clear the signal failure between brain and feet. A quick sideways glance left, then right, an almost imperceptible little shake of her head, already laden with far more hair than anyone this side of 1987 should be struggling under the weight of at 8 o’clock on a Monday morning. Then she was off again.

By the time we were two-abreast on the footpath, I’d watched her repeat this sequence several times over. Just when I thought I’d made it through unscathed, her right arm was thrust up and out in a magnificently theatrical gesture, throwing her off-kilter and sending her crashing into my own right arm which was stuck to my right side, hands thrust only into pockets and not in an especially theatrical way.

The next few moments were like one of those slow-mo sequences from a movie, where the hero of the day jumps into the path of a rogue bullet, crying “Noooooooooooooooooooooooooooo….” as they fly horizontally across the screen. Only this morning there was no bullet. And this chick was by no means a heroin. In those few slow-mo seconds she looked up at me, iPhone in pink bejeweled case plastered to her cheek, with an expression that said all at once, “please, like, yes, like I have no idea what’s going on, like, ummmmm, why did you just walk in to me, like whatever”. It was priceless, the kind of expression you’d expect to see on the face of an English backpacker struggling to decide where – or who – they were after ten-too-many Jägerbombs at the Coogee Bay Hotel. Then, just as quickly as it had slowed down, the space-time continuum reset itself to normal speed and she was back to the intensely theatrical gestures and intellectual phone conversation – “some douche just walked into me, like, uggh, anyways, so yeah, she’s just a total betch anyway, like, do you know what I mean? Like totally. What a betch. Totally.”

All the time I thought I was keeping her at arm’s length and trying to walk past her and I was, like, totally walking into her. Probably on purpose too, just to knock her off her dangerously high stilettos or something. Geez, what a douche. The poor thing, though. Surrounded by douches and total betches and with hair and shoes that were, collectively, taller than she was… what a way to kick off a Monday!

But even more terrifying than the prospect of ever walking near that woman again is the knowledge that she more than likely has a car, or at least a driver’s license. And she probably does exactly what she was doing on the footpath this morning while she drives.

So today it transpired that the National Road Safety Council wants the NSW government to ban all motorists under the age of 26 from using mobile phones while driving. More than that, they also want the government to “explore technologies” that would prohibit phone reception in cars, period. 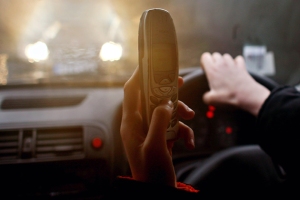 Where’s Siri when you really need her?

Let me get this straight. They want to take the first generation to’ve actually grown up with mobile devices, a generation with a voracious appetite for all things text, social media and phone-related and an almost equal obsession with hearing, knowing, seeing and responding to everything as it happens, however pointless or trivial; they want to take the mobile phone (‘mobile device’ is, I think, the term de jour), which I’d guess 99.9% of said generation have at least one of and would be able to operate in their sleep, blindfolded and gagged, hands tied behind their backs, in a straight jacket, thrown off a bridge and floating to the bottom of the world’s fastest-flowing tidal river; they want to take the humble motor car, which we already know to be involved in the deaths of far too many 18-25 year olds; they want to take all three elements and have the NSW government create a new law that says anyone under 26 is banned from using a mobile phone while driving.

But let’s go one better than that and also invent some kind of technology that prevents everyone from being able to use a phone whilst inside a vehicle, be they driver or passenger, irrespective of the fact that they may’ve had decades of driving experience and may have legitimate cause for using a hands-free device in the way it was intended, for whatever purpose. Stuff the lotta yaz!

Yep, pretty awesome suggestion there, National Road Safety Council. Just what we need – another pointless law that’s nye-on impossible to effectively and consistently police. As for their other bizarre proposal, I can only assume a member of the Council will be setting off in their TARDIS at the earliest opportunity – first stop: “the future” – to avail themselves of such fantastical technology.

At any rate according to a survey by the recently renamed RTA, 40% of P2 drivers – those on ‘green Ps’ for the 2nd and 3rd years of their provisional driver’s license – fessed up to using a mobile phone while driving. Presumably not of the hands-free variety. Presumably at least half of the survey’s respondents also lied.

Currently it’s only illegal in NSW for drivers on a Learner’s Permit or a P1 license (drivers on their ‘red Ps’ for the 1st twelve months of their provisional license) to use a mobile while driving. At the risk of sounding a tad exaggerative, I can’t remember the last time I saw a red or a green P-plater driving past me, toward me or behind me who wasn’t either talking directly into a hand-held phone or quite obviously playing with some kind of mobile device somewhere below the level of the window sill or steering wheel and, consequently, conveniently out of view. You see it everywhere. And it isn’t just P-platers. Older, more experienced drivers who should know better and who, in all likelihood, aren’t responding to anything even remotely important, do it too. As with people who speed, people who talk and text while driving often don’t even appreciate that they’re actually breaking the law. They are, to all intents and purposes, criminals.

So if those who shouldn’t be using a phone while driving at all don’t care and those who should be restricted to hands-free devices are so blatant in their flaunting of the law as well, what’s the point of introducing yet another law that nobody will pay any attention to and won’t – can’t – be effectively policed?

Another pointless ban isn’t the answer here. What’s needed is a change of mindset. Something that, somehow, convinces drivers – of all ages and levels of experience – of the incredible loss of focus and concentration from even the most basic of functions when talking or texting.

It’s such a simple message. Cars and phones don’t mix – you only have to watch someone walk and talk to know that.